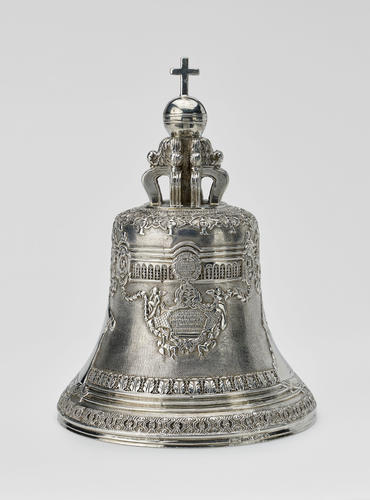 The original Tsar’s Bell, considered the largest bronze bell in the world, measures 8 m in height and 20 ft in diameter and weighs 200 tons. It was cast in 1735 by the foundry master Ivan Matorin at the command of Tsarina Anna and was damaged by a fire in 1737. This was the third version of the bell, each version being made progressively larger, the first made in 1600 and both earlier versions also destroyed in fires, respectively in the mid-17th century and again in 1701. It lay imbedded for a century before it was raised into its present position in 1836. Since that date it has become a favorite tourist attraction, inspiring numerous miniature renditions.

Carl Johann Tegelsten (1798-1852) – a Russian silversmith and bronze-worker of Finnish descent. Qualified as a master craftsman in St.Petersburg in 1825. Since the 1830s much of his work was retailed by the fashionable English Store, owned by Konstantin Nicholls and Wilhelm Plincke. A leading court silver and goldsmith, Tegelsten became famous for producing services and tablewares in the Neo-Rococo taste in preparation for the marriages of many members of the Romanov family.